Water voles are riparian animals which means they live along the edge of watercourses, ponds and meres. They need lush vegetation, not only for food but also for cover from predators. They normally form burrow systems in the bank and these can extend up to 5m from the water. Occasionally they make woven nests above ground.

A breeding female has a territory of some 30 to 150m, depending on the quality of the habitat; a male may have several females in his territories. Water voles have to be able to move along watercourses and between water bodies such as ponds. In winter they form larger groups below ground and then move out to find breeding territories in spring, often travelling several kilometres in the process. Young water voles also travel in search of feeding territory. It is thus essential that suitable habitat remains connected to other areas for the water voles to move between them. Water voles are low down the food chain and local populations can easily be decimated by predators. However, if the habitat is connected to nearby populations, recolonisation can occur. 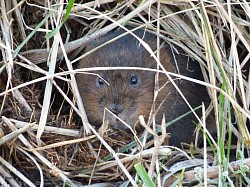